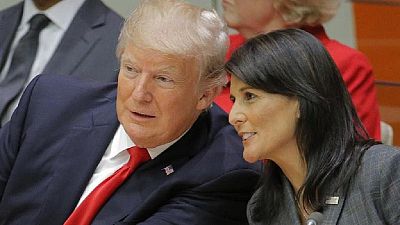 The United States has promised up to $60 million to support the Group of Five Sahel States (G5 Sahel) Joint Force’s counter-terrorism efforts, the State Department said on Monday.

The U.S. support for the G5 force falls short of an expectation by France and others that Washington would back direct funding from the United Nations.

We believe that the G5 force must be, first and foremost, owned by the countries of the region themselves.

“We believe that the G5 force must be, first and foremost, owned by the countries of the region themselves,” said the U.S. ambassador to the U.N. Nikki Haley in remarks to the Security Council, following news of the new cash commitment.

“We expect that the G5 countries will take on full regional ownership of the force within a period of three to six years, with continued U.S. engagement,” she said.

A non-U.S. Security Council diplomat said, however, the U.S. is keen on continuing to look for some kind of direct U.N. involvement in supporting the G5 force.

An ambush by unidentified militants this month in Niger killed four U.S. Special Forces troops and threw a spotlight on American involvement in counter-terrorism operations in the region.

The funds pledge, which must now be discussed with Congress, will bolster the U.S.’s regional partners in their fight against Islamic State and other terrorist networks, Secretary of State Rex Tillerson said in the statement.

Washington is wary of funding the G5 through the United Nations at a time when the Trump administration is aiming to cut U.N. expenditures on peacekeeping operations around the world, and has indicated it prefers to support the force on a bilateral basis.

The G5 countries have set a first-year operating budget of just under $500 million, and about a quarter of that was committed before the U.S. announcement. A donors conference will be held in Brussels in mid December.