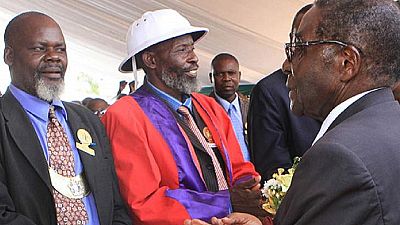 The Zimbabwean government has purchased 226 Isuzu double cab four-wheel drive vehicles for tribal chiefs in the country to “improve their statuses”.

This was announced by Local Government, Public Works and National Housing Minister Saviour Kasukuwere ahead of the annual National Council of Chiefs Conference in Bulawayo attended by President Robert Mugabe.

“We acknowledge that the chiefs had no transport; we will give them Isuzu trucks in the next two weeks. They should come to Harare to get their vehicles,” the cabinet minister told local media.

Mugabe told the chiefs at the conference on Saturday that the purchase of the vehicles from South Africa by the government was a way of improving their status.

I believe that you spoke to the Local Government who gave you an idea of what the State is offering; we want to restore your status, to become a people of honour, not only to your people, but also to the State.

“Sorry, for those years you have been made the poorest of the poor. You are not in good shape. I believe that you spoke to the Local Government who gave you an idea of what the State is offering; we want to restore your status, to become a people of honour, not only to your people, but also to the State,” he was quoted by the local Sunday Mail newspaper.

“So then, you say you need means of transport; it’s okay, it’s fine … We made sure that the chiefs were given strong, well-equipped vehicles, capable of transporting and giving your mothers and wives the pleasure of royalty. So, I hope it’s coming soon, just like that,” he said in the Shona language.

The vehicles come with a raise in the allowances of the chiefs who form part of the constitutional body National Council of Chiefs led by its president Fortune Charumbira.

“We want to thank you, Your Excellency, for your commitment and dedication to working with chiefs. You have given our courts judicial powers that have given us authority and you have ensured that we remain the custodians of the land. The recognition has seen us getting a salary while recently, our headmen got an allowance,” Chief Charumbira said.

He further stirred controversy by pledging support to the ruling Zanu-PF party which contravenes the constitution.

“Zanu-PF fought for the land of which we are the custodians, so how then can anyone expect us not to support the party that made sure the land we preside over is returned to us?

“I am not ashamed to say we support Zanu-PF because chiefs and the ruling party are inseparable. We know that the 2014 Congress elected President Mugabe as the Presidential candidate. So, we are saying come 2018, we are supporting President Mugabe through and through, and we are assuring the President of overwhelming victory,” he said.