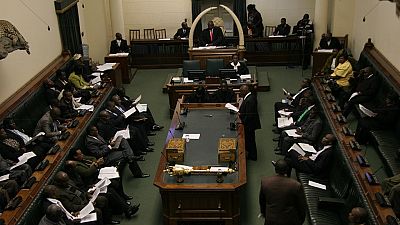 Zimbabwean Members of Parliament of both sides of the political divide have protested against unpaid allowances and constituency development funds since 2011.

The legislators refused to join any debate on Thursday and threatened to boycott Friday’s pre-budget meeting as well as the national budget debate if their demands are not met, local news portal NewsDay reported.

Government is reported to be owing the members $50,000 in Constituency Development Fund (CDF) since 2011, including laptops and tablets.

“Madam Speaker, you are talking of attending the pre-budget seminar when there is nothing that has been done about MPs’ welfare. We were also promised iPads before Christmas last year, but now, we are going to another Christmas without iPads,” opposition MP Prosper Chapfiwa Mutseyami raised the issue which was supported by the entire house.

Whenever there is a funeral, our constituents expect us to buy coffins and food. My car now needs $6,000 to repair and yet I get $2,000 per month. Parents expect us to pay fees for their children.

“The matter cannot be swept under the carpet. We are under siege and whenever we speak, we are told to sit down. Why do we need to do certain things in order for us to get what belongs to us?” said ruling Zanu-PF MP John Holder after the deputy speaker Mabel Chinomona who warned against the members publicizing their frustration.

Another MP Temba Mliswa was quoted by the NewsDay as saying “They are enjoying their holidays when no one is fighting for us. MPs end up selling coupons to survive and our dignity is destroyed while ministers get salaries and new cars. Tomorrow, there is a pre-budget seminar and you want us to get food and stay at hotels. We are tired of that. We want our money and allowances.”

The MPs are paid $2,000 monthly salaries and $75 sitting allowances which they describe as inadequate to develop their constituencies.

“Whenever there is a funeral, our constituents expect us to buy coffins and food. My car now needs $6,000 to repair and yet I get $2,000 per month. Parents expect us to pay fees for their children. We are expected to be the custodians of the povo and subsidise government,” said ruling party MP Irene Zindi.

The deputy speaker assured the house, amid tantrums, that the issues will be addressed.

Zimbabwe is facing an economic crisis that was worsened by an acute drought last year. The country was hit by a currency shortage leading to the introduction of bond notes to solve the situation.

Workers were not paid for months including servicemen, civil servants and teachers who received their salaries in batches during the start of the year.

President Robert Mugabe replaced Finance Minister Patrick Chinamasa last week with Home Affairs Minister Ignatius Chombo in a cabinet reshuffle against the backdrop of the currency shortage that has dealt a fresh blow to confidence and investment in the country.