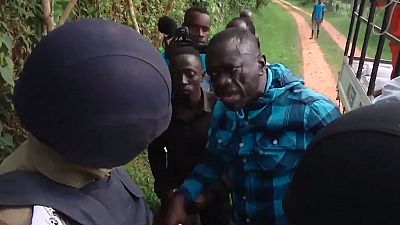 <p>A leading Ugandan opposition figure was arrested and charged with murder, police said on Friday, after a deadly anti-government rally that security personnel broke up with teargas and bullets.</p> <p>Kizza Besigye, who has contested and lost four presidential elections against long-time leader Yoweri Museveni, was detained on Thursday.</p> <p>He and two other senior officials of his opposition Forum for Democratic Change (<span class="caps">FDC</span>) were held as they travelled to the town of Kabale near the border with Rwanda, police spokesman Denis Namuwoza said.</p> <p>In Wednesday’s rally, two people died as police fought running battles with government opponents who were assembling to denounce a legislative plan to extend Museveni’s rule.</p> <p>“Besigye and his colleagues led these youths who stoned police and caused deaths,” Namuwoza told Reuters.</p> <p>Museveni, 73, is barred by from running again by the constitution which caps the age of a presidential candidate at 75. The next elections are due in 2021.</p> <p>In power for more than three decades, Museveni is backing proposed legislation to remove that age ceiling.</p> <p><strong><em>Reuters</em></strong></p>