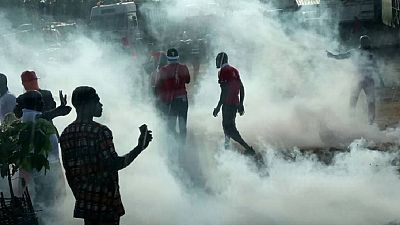 Public buildings in Togo’s second largest city of Sokode were reportedly torched by angry protesters late Monday night after the arrest of an Imam and opposition figure.

The gendarmerie, post office, parts of the Togo Telecoms building among others were targeted by the protesters who clashed with the security forces, local media reported.

#Togo: all throughout #Sokode people are setting of barricades and burning cars, some are calling this a revolt pic.twitter.com/JhOuWDINfc

The Imam, Alpha Alhassane is a revered spiritual leader in the city and a known adviser of the opposition Pan-African National Party leader Tikpi Atchadam.

The reason for his arrest is unknown but reported to be linked to the series of anti-government protests organised by the opposition.

At 8PM, #Togo gov. cut off power, ordered military who break in to arrest Imam in #Sokodé for preaching against dictator FEGnassingbe. pic.twitter.com/u1wY30oGHR

The police fired tear gas to quell the protests which are reported to have spread to the capital Lome.

Several people have been arrested in the process.

The Togolese opposition are calling for a two five-year term limit for presidents as well as a two-round voting system.

Their boycott of parliament on Tuesday blocked the passage of the bill forcing it to be decided in a referendum due to the lack of the needed four-fifths majority.

Government buildings such as post office, police office, mayor's office are on fire in the city of #Sokode in northern #Togo #Togodebout

Following the arrest of an Iman and leader of PNP party tonight in #Sokode, north of #Togo, an insurgency has started #TogoDebout pic.twitter.com/28V12lrTeS