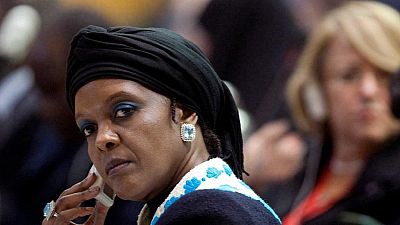 A Zimbabwean journalist, Kenneth Nyangani, has been arrested over the publication of a story alleging that First Lady Grace Mugabe had made a donation of underwear to party faithful.

His lawyer confirmed that Kenneth was likely to be charged with criminal defamation and that he was detained for “allegedly writing and publishing a story over the donation of some used undergarments.”

But a legal aid group, Zimbabwe Lawyers for Human Rights (ZHRL), confirmed late Tuesday that he had been charged with criminal nuisance.

The said story was carried by the privately-owned NewsDay news portal on October 2. The journalist was arrested on Monday evening and has since been in police custody.

“Newsday reported that Esau Mupfumi, the ZANU PF Member of Parliament for Chikanga-Dangamvura constituency handed over the donation from Grace comprising of used undergarments and night garbs to some ZANU PF party supporters at a meeting held in Mutare in Manicaland province over the weekend.

“ZLHR understands that Mupfumi filed the report with the police and deposed to a statement which is unclear if the legislator is the complainant himself or the First Lady,” a ZHRL statement read.

Second-hand clothing is a big deal in parts of the continent where they are the clothing of choice for most people. Some countries like Rwanda and Kenya have banned them even though in Zimbabwe they are still allowed.

It is said that landlocked Zimbabwe gets its second-hand clothes supply from neighbouring Mozambique. Zimbabwe is currently facing an economic crisis that led to the introduction of bond notes to check hyperinflation.