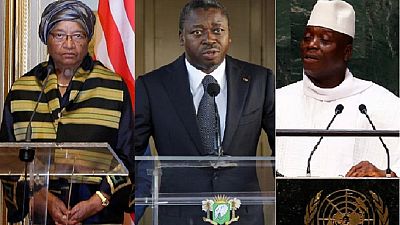 The west African regional bloc, the Economic Community of West African States (ECOWAS) appears to have been or has been the most vibrant political bloc from late 2016 to early 2017.

Then led by outgoing Liberian president Ellen Johnson Sirleaf, the body played an active role in averting a political crisis in the Gambia. A post-election dispute involving longtime ruler Yahya Jammeh had put the country on edge.

With a looming security and humanitarian crisis, Sirleaf along with a number of African leaders moved in – twice meeting with Jammeh in Banjul before ECOWAS met in Abuja to make firm pronouncements on respecting the will of the Gambian people.

It has become unavoidable for Togo to join the rest of West Africa in having term limitations. Our main perspective is to advise the Togolese to take those actions to prevent an escalation.

In January 2017, when ECOWAS’ mission hit a snag, political watchers said the regional body’s posturing relative to enforcing the poll decision and Jammeh’s concession had laid enough grounds to assure Gambians of their unflinching support.

Another key decision at a time when tensions were rising was the temporal relocation of then president-elect Adama Barrow to Senegal to ensure his safety. Then there was the decision to swear Barrow in at the Gambian embassy in Senegal at a time Jammeh had refused to exit.

ECOWAS at different times reiterated a firm commitment to apply necessary force to remove Jammeh and secured a United Nations go – ahead to militarily oust him.

In the end, Jammeh left on different terms but ECOWAS’ position was lauded and is still being applauded. Barrow admitted the timeliness of the move and undertook a regional tour to thank leaders who played a role in averting the potential crisis.

Fast forward to August – September 2017, another political situation is simmering under the watch of ECOWAS, yet its silence till recently was described as “loud worry” by some political and security watchers in the region.

Anti-government protests in the tiny West African country of Togo turned deadly in August when police fired tear gas to disperse protesters in the capital Lome. For over two weeks, the regional bloc was mute on the issue.

After about 15 protesters were jailed and a second round of protests hit the country amid overtures by government at reforms, which were categorically rejected by the opposition – then they spoke, reiterating the obvious, dialogue.

An obvious reason for the eerie and loud silence

The Togolese president who is at the receiving end of the protests, Faure Gnassingbe, was in July elected Chairman of the bloc – a rotating position.

In effect, the man supposed to call for ‘mediation’ and or ‘intervention’ as did Sirleaf in the case of the Gambia, is the one having to sort himself out. The United Nations office in West Africa and the Sahel, has meanwhile, met with President Gnassingbe.

The only pronouncement from the presidency amidst the crisis has been a tweet confirming that the U.N. top official, Mohammed Ibn Chambas, had called for political reforms which the government was committed to pursuing.

“It has become unavoidable for Togo to join the rest of West Africa in having term limitations. Our main perspective is to advise the Togolese to take those actions to prevent an escalation.

“We are in a region where the security challenges are real and menacing and so we don’t want to see any deep political crisis,” Ibn Chambas stated.

Meanwhile, the Togolose opposition has yet to show its next cards on the way forward as part of their plans to remove the 50-year-old family dynasty that has run the small country since Gnassingbe Eyadema took the reigns in 1967.

Eyadema governed for 38 years till his demise in 2005. The army sidestepped the constitution and swore in his son who was a minister at the time. This is in spite of legal provision for the Speaker of the National Assembly to take over as interim president.

With international pressure, he resigned before he won contested elections held later that year. He has since won two other elections – 2010 and 2015. His current mandate ends in 2020, and with term limits scrapped as far back as 2002, there is currently nothing holding him back from seeking a fourth term.

Aside the very rare Bostwana – Zimbabwe scenario where President Ian Khama openly criticized Mugabe asking him to step down, most African leaders will either ‘back’ their peers or keep mute on their affairs – the sovereignty issue.

The current situation brings into sharp focus the work of ECOWAS as a body that cannot be roundly effective as is currently the case. Maybe not only the Togolese political system needs reforms but that of ECOWAS as well – if not more.