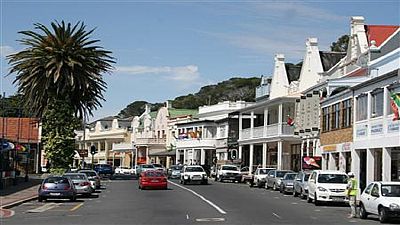 Charmaine Marcus was first expelled from her home in Cape Town in the 1970s, in the name of the apartheid policy. She is threatened again but this time under pressure from the real estate market.

“Looks like they do not want to see us anymore,” the resident of the Woodstock suburb, in the middle of a renovation, is desperate. “But this is our city, we are this city!”

Under an expulsion order, Charmaine Marcus filed an appeal with the court to try to delay its execution. But this half-breed is afraid of being forced again to move against her will. As when, as a child, his neighborhood had been suddenly classified as a zone reserved for whites.

The reality is that this is the only site available for this ... We are now trying to identify other sites in the city so that people who are deported are not obliged to move so far.

Nearly a quarter of a century after the fall of its racist regime, South Africa struggles to emerge from the economic crisis. And like many other sectors, real estate still suffers the fallout.

Except in the coastal city of Cape Town, located at the foot of the majestic Table Mountain: there, the price per square meter has fallen by almost 80% on average since 2010, according to a study carried out by the South African bank FNB.

For expert Toni Enderli, this exception is due to the demographic boom of the megapolis of the southwestern tip of the country, fueled among other things by its reputation of good governance under the Democratic Alliance (DA, opposition).

“The population of the province (Western Cape) has grown by a third in the last 15 years,” Enderli said. “Everyone wants to live in Cape Town, enjoy its atmosphere, but the construction of the housing necessary for their reception did not follow.”

The suburbs of Woodstock, where Charmaine Marcus has been living for 35 years, is being hit hard by this pressure. Its decatised buildings have given way to state-of-the-art residences, fashionable restaurants and their cortege of dynamic and trendy young executives. Unsurprisingly, the price of housing doubled in just five years.

But the building where Charmaine Marcus lives, as a vestige of the modest past of Woodstock, tells a completely different story.

In the living room of this 48-year-old woman, the painting of the ceiling peels without restraint and one of the walls carries a crack that runs to the floor.

On the upper floor, the apartment is empty, devastated two years ago by the flames of a fire that killed one of the tenants. The residents attributed the loss to a maintenance defect on the part of the owner. The latter responded by demanding their expulsion, with the hope of turning his property into a luxury residence.

If their departure is confirmed, Charmaine Marcus and her neighbors know they will not have the means to stay in the neighborhood. Well overpriced. They are likely to be 30 kilometers away in the Wolwerivier emergency relocation camp. Without a hospital, without a school and almost without public transport.

“This city does not work for us, but against us,” insists Shane van der Mescht, one of the leaders of the sling launched by the residents of the Woodstock neighborhood.

A member of a collective of residents called Reclaim the City, he and others occupied an abandoned Woodstock hospital whose rooms and operating rooms were converted into dormitories or meeting rooms after being thrown to the street unceremoniously.

The protesters marching in the streets are all threatened with expulsion. “I see them build these residences, but we can not pay them (…) Where to find 1.4 million rand (100.000 euros) for an apartment?”, One of them, Ismail Sheik Rahim. “We feel like strangers in our own town.”

Reclaim the City accuses the authorities of not doing enough to offer cheap accommodation closer to the city center.

Very recently, the municipality unveiled a project of ten residences with moderate rents. Their construction is expected to move to higher gear by next year, she promises.

“I understand the worry of the inhabitants concerned by an emergency relocation in Wolwerivier,” said Brett Herron, city’s urban development official. But “the reality is that this is the only site available for this … We are now trying to identify other sites in the city so that people who are deported are not obliged to move so far “.

Sitting in front of her apartment entrance, she knows that her fate is sealed, because in the end, if a relocation solution is offered to the residents, the owner of the building will get the right to do whatever he wants his property.

But she refuses to capitulate. “If the municipality does not offer us other housing here or not too far from here, we will not get anywhere,” she promises, “I can guarantee you that we will stay here.”