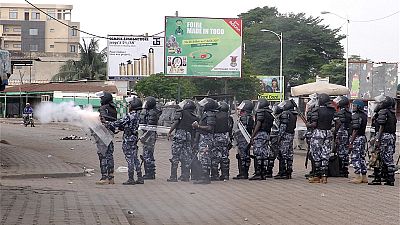 Togolese security services fired teargas late Thursday night to disperse thousands of protesters in the streets of the capital Lome who were determined to stay all night to demand the departure of President Faure Gnassingbe.

The police succeeded in dispersing the crowd who have been demonstrating since Wednesday demanding the revision of the 1992 Constitution to reintroduce presidential term limits.

The protesters marched to the presidency late afternoon where the police had cordoned off the area to prevent access.

Faceoff between the people and the police as they are blocked to move forward to the presidency. We'll surround them soon #Togo #Togoviwofon pic.twitter.com/3h5dBNBihj

After some hours, the police fired teargas to disperse the people who had pitched camp on the main road leading to the presidency, local media report.

Some protesters are reported to have returned to the spot early Friday morning after the repression by the police.

After the brutal repression of a peaceful protest last night, the people of #Togo went back to sleep on the fiekd. Today we will continue pic.twitter.com/9LIMB5CrNb

The two-day protest called by the six-party opposition coalition CAP 2015 and the Pan-African National Party (PNP), is a follow up of the massive August 19 and 20 demonstration that saw Togolese nationals in about half a dozen cities around the world joining in.

At least seven people were killed in clashes with security forces during last month’s demonstration in the north of the capital Lome.

27 people were arrested and 15 were handed sentences ranging between five and nine months.

The government on Wednesday passed a draft bill to modify Article 59 of the constitution which will address the concerns of the protesters including the reintroduction of presidential term limits.

Internet was shutdown during the two days of planned protests and mobile phone connectivity was unstable.

The opposition protesters have vowed to continue the protests until the original two five-year term limits are restored including a two-ballot system, reform of the Constitutional Court and the Electoral Commission.

President Faure Gnassingbe succeeded his father Gnassingbe Eyadema who died of a heart attack after spending 38 years in office.

Faure was sworn in with the support of the army and won the 2005 elections leading to deadly protests.

He subsequently won the 2010 and 2015 presidential elections. Faure’s mandate ends in 2020 and it is unclear if he will stand again for re-election.