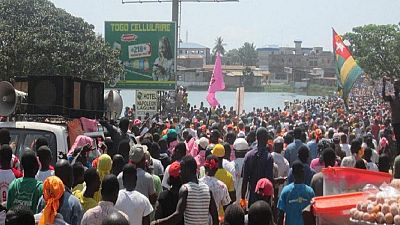 The Togolese government has passed a draft bill to reintroduce presidential term limits as hundreds of protesters gather in the capital Lome and other towns.

The cabinet said in a statement after its decision on Tuesday night that the bill will modify Article 59 of the constitution which will address the concerns of the protesters.

The decision by the government comes hours before the planned mass protest called by the six-party opposition coalition CAP 2015 and the Pan-African National Party (PNP).

They are demanding for the revision of the 1992 Constitution whose Article 59 was modified in 2002 allowing Faure Gnassingbe to run for an unlimited term.

They want the original two five-year term limit be restored, a two-ballot system, reform of the Constitutional Court and the Electoral Commission.

A day before the protest, internet connectivity was barred yet unconfirmed images of the protests were posted online showing thousands of people marching in the streets of the capital Lome, northern city of Bafilo, Tchamba in the north among other towns.

According to Togolese activist Farida Nabourema who is tweeting from neighbouring Ghana, some Togolese go to the border where Ghana’s telecommunication networks are accessible to transmit updates of the protest online.

She also insisted that the protest will go on despite the decision by the government because the authorities may change their mind.

Thousands of Togolese nationals held demonstrations in about half a dozen cities around the world including north of the capital Lome last month where at least seven people were killed in clashes with security forces.

27 people were arrested during the protests and 15 were handed sentences last week ranging between five and nine months by a court in Lome.

President Faure Gnassingbe has been in power since his father Gnassingbe Eyadema died after spending 38 years in office.

In 2005 when Eyadema died of heart attack, Faure, who was a minister at the time was sworn in as acting president by the military instead of the President of the National Assembly.

He resigned a few days later after pressure from the international and regional communities. Faure stood for the disputed 2005 elections months later and won, leading to deadly protests and displacement of thousands of people.

The elections were described as fraudulent by election observer groups.

The protests in 2005 were met with violence by the security forces leaving over a hundred people killed and several opposition members arrested.

Faure Gnassingbe was re-elected in 2010 and in 2015. His mandate ends in 2020 and it is unclear if he will stand again for re-election.

Revolution loading in #TOGO. We are tired of the 50 years old regime of the Gnassingbe. #Togodebout #Togoviwofon SaharaReporters pic.twitter.com/IbWXE8nTp5