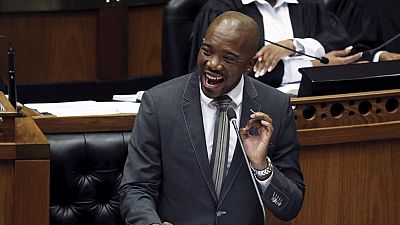 South Africa’s main opposition Democratic Alliance (DA) lost a motion on Tuesday to have parliament dissolved and a national election called, in its latest attempt to oust President Jacob Zuma from office.

The party is hoping to unseat Zuma before elections scheduled for 2019, citing a record in office marred by allegations of sleaze and influence-peddling.

But its motion in parliament failed after only 83 lawmakers supported it while 229 voted against. Seven others abstained.

“South Africa deserves a fresh start and the constitution makes provision for early elections in instances such as these, where there is a legitimacy crisis,” DA chief whip John Steenhuisen said shortly before the vote.

The 75-year-old Zuma was heckled by opposition parties last week when he made his first appearance in parliament after surviving a no-confidence vote on Aug. 8.

The president, who has survived several previous no-confidence motions, was not in parliament on Tuesday.

About 30 African National Congress (ANC) party lawmakers voted with the opposition in the August no-confidence vote, emboldening the DA to make Tuesday’s bid for early elections.

The ANC, which retains an overwhelming majority in parliament, described the motion as “frivolous” and smaller opposition parties said they would not support it either.

“We are rejecting the motion with the contempt it deserves,” said Mzameni Mdakane of the ANC.

Separately, the Constitutional Court said on Tuesday it would reserve judgment on a request by opposition parties that it make the speaker of parliament initiate impeachment proceedings against Zuma.

Zuma is due to step down as president of the ruling ANC at a conference in December.

Africa’s most industrialised economy has had its credit rating downgraded to junk by two of the three main credit rating agencies. In July, Stats SA said nearly a fourth of all households are in poverty, while unemployment has been stubbornly high at 14-year highs around 28 percent.

The economy emerged from a recession in the second quarter as agriculture helped it grow more than expected, official figures showed on Tuesday, strengthening the rand and bonds.