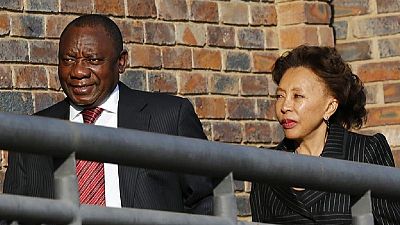 Wife of South Africa’s Deputy President Cyril Ramaphosa have come to his defence following media reports over the weekend that he had affairs with several women.

Tshepo Motsepe said she was hurt by the smear campaign aimed at discrediting her husband as the race heats up over who leads the ruling African National Congress (ANC) in a congress slated for December.

“It is very sad what is happening. It’s disappointing that people have to go to such lengths to discredit a person. I am very, very upset about it.

We have been together for a very long time and are happily married. I support and respect him and I love him.

“We have been together for a very long time and are happily married. I support and respect him and I love him,” she said. describing it as an attempt to discredit him ahead of the ruling party’s leadership contest.

Ramaphosa admitted having only one extramarital affair which he said had ended eight years ago. “I am not a blesser,” Ramaphosa said, using the local term for sugar daddy.

He accused detractors of using the leak to derail his leadership bid but said he was undeterred by the smear campaign.

“I have to be prevented at all costs from ascending to the position of president of the ANC. Some have even said it will be over their dead bodies. I have not committed any crimes, I have not stolen any money, I have not looted state resources.

“But I am being targeted and smeared. basically, state institutions have been utilized to hack into my private e-mails. State institutions should never be used to fight political battles,” he told the Sunday Times news portal.

Ramaphosa has pledged to fight the corruption that has plagued Zuma’s time in office. Dlamini-Zuma’s campaign has been hinged on what she calls radical economic transformation.

The Sunday Independent newspaper said it obtained emails linking Ramaphosa to at least eight women, saying he pays their tuition fees, accommodation and other expenses.

Ramaphosa had filed a court application on Saturday night to try to prevent the newspaper from running the story but a judge ruled that it could be published.

Ramaphosa and his wife said they supported 30 women and 24 men financially every month. He conceded he had an affair that ended eight years ago, and had since reconciled with his wife.