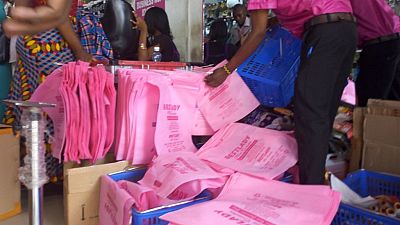 With the coming into force of a tough law banning plastics in the country, Kenyans have started seeking alternatives to the hitherto widely used plastics.

Local portal, Citizen TV Kenya, reports that a major substitute for the banned products is paper. Old newspapers and are now hot cake in the country with their prices soaring by 100%.

The law banning plastics was passed in March this year but enforcement began today. The government said initial enforcement will be targeted at manufacturers and suppliers and not the common man.

If we continue like this, by 2050, we will have more plastic in the ocean than fish.

That notwithstanding, most people have said they will observe the ban to avoid the hefty fine that comes with falling foul of it.

A person found selling, manufacturing or in possession of plastics could face fines of up to $38,000 or prison sentences of up to four years.

The East African nation joins more than 40 other countries that have banned, partly banned or taxed single use plastic bags, including China, France, Rwanda, and Italy.

Many bags drift into the ocean, strangling turtles, suffocating seabirds and filling the stomachs of dolphins and whales with waste until they die of starvation.

“If we continue like this, by 2050, we will have more plastic in the ocean than fish,” said Habib El-Habr, an expert on marine litter working with the U.N. Environment Programme in Kenya.

Plastic bags, which El-Habr says take between 500 to 1,000 years to break down, also enter the human food chain through fish and other animals. In Nairobi’s slaughterhouses, some cows destined for human consumption had 20 bags removed from their stomachs.