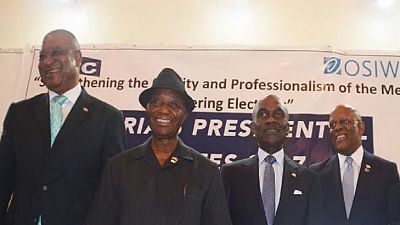 Liberia votes on October 10 and already, the elections fever has gripped the country as campaigns are being held by the 22 presidential candidates who are seeking to replace Ellen Johnson Sirleaf.

The country’s first presidential debate was held on August 17 with only six candidates selected to lay out their plans for the Liberian people.

Organisers, Deepening Democracy Coalition (DDC) which is a coalition of five media rights organisations, said their choice of six people was based on the results of an opinion poll that put them at the top.

Only four candidates were present for the town hall debate in Paynesville, outside Monrovia.

The two absent candidates were George Weah of the Coalition for Democratic Change (CDC) and the former governor of the Central Bank of Liberia Dr. J. Mills Jones of the Movement for Economic Empowerment(MOVEE).

Those who made it to the debate included Vice President Joseph Boakai of the ruling Unity Party (UP), Charles Brumskine of the Liberty Party (LP), Alexander Cummings of the Alternative National Congress (ANC) and Benoni Urey of the All Liberian Party (ALP).

The candidates also addressed how they will implement their plans and their source of funding.

Vice President Boakai promised to build the road network in the country which will provide jobs and boost the economy. He also stressed on making Liberia a number one tourist destination.

Businessman Benoni Urey promised to spread the wealth of the country to other regions and “repair” the broken economy.

Cummings also addressed the high level of poverty in Liberia which he says is the fundamental problem he will solve.

Brumskine, who is a lawyer, also stressed on quality healthcare and education to have a stronger work force who will change the face of the country.

The organisers of the debate said the next six candidates could be invited for the subsequent debates before the October 10 elections.