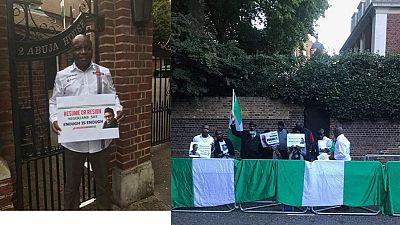 A Nigerian pressure group has staged a protest outside the residence of ailing President Muhammadu Buhari calling for him to return home or resign as president.

The Concerned Nigerians group was granted a permit for the protest on Friday and Saturday as a follow up to series of protests held in the capital Abuja in the past weeks.

The “Resume or Resign” protesters were allocated a barricaded spot across the Abuja House where the president is residing, and they had mounted banners and posters with messages demanding his resumption of office or resignation.

What a huge turnout of “resume or resign” protesters Abuja house in London. Hahahahaha.... pic.twitter.com/Tf5BsqX7qz

Unlike that of London, the protest in Abuja last Tuesday became physical when pro-Buhari protesters clashed with the opposing group at a market.

Buhari left Nigeria for Britain on May 7 for medical attention.

This is his second medical leave this year for an undisclosed ailment creating a lot of controversy in the country since his first leave in January that lasted nearly two months.

He was visited by government officials last month to prove to Nigerians that he was alive after rumours of his death spread across the country.

Buhari announced last week that he is ready to return from London and is waiting for his doctor’s approval.

Until then, the protesters say they will continue protesting till he meets their demands.