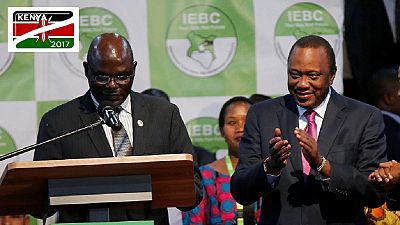 Kenya’s President Uhuru Kenyatta has been declared winner of the 2017 presidential election.

The Independent Electoral and Boundaries Commission (IEBC) Chairman Wafula Chebukati announced the final results on Friday at the Bomas of Kenya in the capital Nairobi.

The declaration was made in the presence of all the presidential candidates after the IEBC chair took pains to present confirmed results from each of the 49 counties.

Odinga has earlier disputed provisional results displayed on the IEBC website which placed Kenyatta in the lead. He described it as fraudulent and a machination of hackers.

NASA said on Thursday that Odinga was in the lead per some unsubstantiated results they claim were from the IEBC servers. They demanded that Odinga be declared president.

The IEBC maintained that there was no hack in their system and they will declare the winner of the election only after they verified and validated all the results directly from the polling stations.

Protests erupted in parts of the country after Odinga’s press conference a day after the election when he announced the alleged hacking.

Four people died during the protests that were swiftly contained by the police who used tear gas.

The nine election observer missions in the country said the elections were free, fair and transparent and called on Odinga to stop making statements that could incite the public.

They also directed him to resort to the courts with all his grievances.

Swearing-in of the president-elect is scheduled for August 29 and the opposition has until August 22 to file a petition at the Supreme Court.

President Uhuru Kenyatta will be the 5th President of Kenya after he is sworn in.