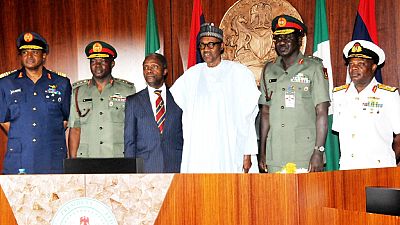 Nigeria’s military chiefs have relocated to Maiduguri, capital of the country’s northeastern Borno State. The move is to better coordinate the counter-insurgency fight against Boko Haram.

Maiduguri is the heartland of the insurgent group Boko Haram who continue to launch deadly attacks on the city and other Borno towns.

An army spokesperson confirmed to the BBC’s Hausa service that the three top army chiefs – chief of defense staff, chief of air staff and chief of the army flew into Maiduguri to oversee the operations.

We have also agreed that we should get more surveillance devices, cameras that will be able to see distant attackers coming to the position of our troops.

Nigeria’s acting president Yemi Osinbajo last week ordered security chiefs to relocate to the region following a Boko Haram attack that resulted in the loss of over 50 lives.

The casualties – included civilians and members of the military – resulted after an attempted rescue of an oil exploration team from the University of Maiduguri (UNIMAID) and the state oil firm. The team were kidnapped by suspected Boko Haram militants last Wednesday.

This is the second time the military command center is moved to Maiduguri, President Buhari in his inaugural presidential speech ordered the center to be moved, it was returned to Abuja at a time the army said it had largely won the war against the group.

“The command centre will be relocated to Maiduguri and remain until Boko Haram is completely subdued. But we can not claim to have defeated Boko Haram without rescuing the Chibok girls and all other innocent persons held hostage by insurgents,” Buhari said in 2015.

Defense minister Mansur Dan-Ali told the media last week that the military will also be given extra support to better combat the militants.

“We agreed that they should move back to the command centre again and see what are the things happening there. We have also agreed that we should get more surveillance devices, cameras that will be able to see distant attackers coming to the position of our troops,” he said.

He further confirmed the position held by most security watchers that attacks by Boko Haram spiked particularly in the rainy season.

“The period of the raining season is a difficult moment for us. We cannot dominate the environment like what we do during the dry season but efforts are geared towards regaining our areas. All these ambushes that are happening would be stopped,” he added.

Northeastern Nigeria has been the focus area for Boko Haram attacks over the past eight years. At least 20,000 people have been killed and 2.7 million people have been forced to flee their homes.