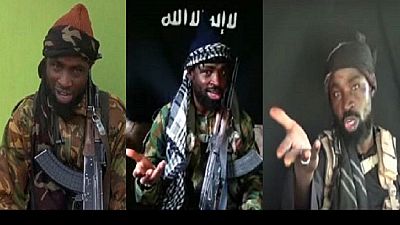 West Africa has its fair share of terrorism right from the Sahel region with al-Qaeda in the Islamic Maghreb (AQIM) and its affiliates, Mali’s Tuareg rebels through to Boko Haram in the Lake Chad region.

One would more often than not, find it difficult to name particular figure heads of terrorist groups. That is not the case with Nigeria’s Boko Haram, whose factional leader, Abubakar Shekau is the most visible in communicating with the world.

Shekau has appeared in over a dozen videos released by the group usually to issue warnings to the government and people of Nigeria. At other times to confirm their military forays and successes. The most recent news on him had to do with an deadline given by the Army chief that troops engaged in the Boko Haram war should deliver Shekau dead or alive in 40 days.

He has also taken swipes at political leaders both local and continental as well as international. The most recent global leader being U.S. President Donald Trump shortly after his election in November 2016.

Shekau often appears flanked by masked fighters with a gun hanging across his chest as he delivers his prepared message, his chewing stick is also a regular feature in his videos.

An exception to his usually robust tough-talking posture was a video released in the middle of last year in which a more subdued Shekau appeared announcing his end. In the said video he said; ““For me, the end has come. May Allah protect us from evil… I thank my creator.”

Who is the man Abubakar Shekau, here are some facts about the face of Boko Haram’s insurgency.

1. His date of birth is unknown, reports indicate that Shekau was born in Yobe State (northeast Nigeria) between 1965 and 1975.

2. Shekau rose to become leader of Boko Haram after the death of its founder, Mohammed Yusuf, in 2002.

3. He was designated as a terrorist by the United States in 2012 and a $7m bounty was placed on him a year later.

4. Shekau is the main face of the group appearing in most videos released to confirm attacks and to send information. One of the most watched being in 2014 when he appeared to confirm the abduction of Chibok girls.

5. He speaks Fulani, Kanuri – a local language used in the north of Nigeria, the widely spoken Hausa, reads Arabic and sparsely uses English in his addresses.

SUGGESTED READING Nigerian Army vs. Boko Haram: A war on ground, on air and online

6. Shekau was leader when Boko Haram in March 2015 pledged allegiance to the Islamic State (IS). The group announced a new leader in Abu Musa Al Barnawi son of the founder but Shekau rejected the leadership change and has insisted that he remains in charge.

7. The verbal targets of his videos are the Nigerian army especially the Army Chief, Lt. Gen. Yusuf Tukur Buratai, the political establishment and Nigerians in general. The Shekau-led factions in one such videos releases said they will capture President Muhammadu Buhari physically as part of their fight against ‘infidels.’

8. Shekau is usually flanked by masked fighters whiles delivering his address. The traditional black ISIS flag is either mounted somewhere of it forms the backdrop of his videos when he is seated.

9. The Army claim to have captured Shekau’s flag and Quran during a raid of the terrorists hub of Camp Zero in the Sambisa forest. The large mountainous forest area (bordering parts of Nigeria and Cameroon) is the known location of the Boko Haram group.

10. Shekau is a man of many lives. His death and fatal injuries to him have been reported on multiple occasions. His first death was in 2009 but the most recent was in May this year when the Army reported that Shekau had been fatally wounded following air strikes. He has since appeared in more than three videos.