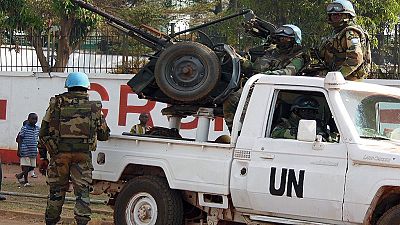 The peacekeepers were ambushed by suspected anti-balaka fighters in the town of Banagassou, 700 kilometres (435 miles) east of the capital Bangui, as they stocked up on water to deliver to the population, the mission said in a statement.

Thousands have died in an ethnic and religious conflict that broke out when mainly Muslim Seleka rebels ousted President Francois Bozize in 2013, provoking a backlash from Christian anti-balaka militias.

Tuesday’s raid, which injured a third soldier, followed similar attacks by suspected anti-balaka fighters in the diamond-mining town in recent days, including one on Sunday that killed a Moroccan peacekeeper and left three others wounded.

The violence has prompted several humanitarian organisations to suspend their activities in Bangassou, where fighting in May killed at least 115 people.

It also points to the inability of the 13,000-strong U.N. force to contain violence in a country where government control barely extends outside the capital.

“I am shocked by these new losses of human life and I firmly condemn this flagrant violation of the right to life and of international law,” mission chief Parfait Onanga-Anyanga said in the statement.

Violence has escalated in Central African Republic since former colonial power France ended its peacekeeping mission in the country last year, and despite a peace deal signed between the government and rival factions in Rome last month.