Burundi says it is confident in U.S. police to find missing robotics team 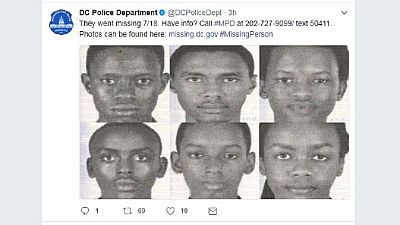 Burundi is counting on U.S. law enforcement officials to find six teenagers who went missing after a robotics competition in Washington, an official with the East African country’s embassy said on Friday.

The teens, aged 16 to 18, were last seen on Tuesday after the FIRST Global Robotics Challenge, and two have since been spotted crossing the border into Canada, according to Washington, D.C., police.

“We have been in touch with the Metropolitan Police Department; they told us that they are doing what they can to find those teens,” Benjamin Manirakiza, first counselor in the Burundi Embassy in Washington, said in a phone interview on Friday. “We have confidence in the capacity of the police … It’s very important, of course, that the kids be safe.”

A Washington police spokeswoman said the disappearance of the teenagers was still under investigation on Friday, and declined to say what U.S. state they were spotted crossing from.

Police have said they do not believe foul play was involved in the youths’ disappearance.

Two of the teens – Audrey Mwamikazi, 17, and 16-year-old Don Ingabire – were spotted crossing the United States border into Canada. The other missing Burundians were named as Nice Munezero, 17; Kevin Sabumukiza, 17; Richard Irakoze, 18; and Aristide Irambona, 18. Police said the students had one-year visas.

Officials at Canada’s Border Services Agency, as well as the Burundian embassy in Ottawa, said they had no information on the teens’ whereabouts.

Teams of high school students from more than 150 countries took part in the competition, which was designed to encourage careers in math and technology. An all-girl squad from Afghanistan drew worldwide media attention when President Donald Trump intervened after they were denied U.S. visas.

Burundi has long been plagued by civil war and other violence. Fighting has killed at least 700 people and forced 400,000 from their homes since April 2015 when President Pierre Nkurunziza said he would run for a third term in office.

FIRST Global, a U.S.-based non-profit that organized the competition, said it had notified police about the missing competitors.

More than 3,000 would-be refugees have crossed the U.S. border into Canada so far this year, according to government statistics. Many have told Reuters they are fleeing Trump’s immigration crackdown.