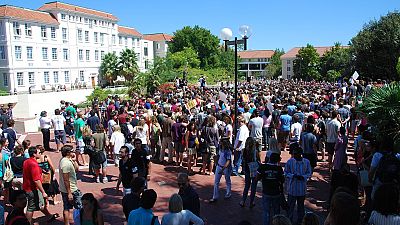 Three students of the Stellenbosch University in South Africa have been found guilty of indiscipline by putting up Nazi-inspired posters on campus in May.

The university’s disciplinary committee concluded its inquiry last week and sanctioned the students to a 100 hours community service by the end of the first semester of 2018. 60 hours should be completed by the end of 2017.

Besides the community service, the students have to complete an assignment on constructive engagement on campus, and should be submitted by February, 2018, local media News24 reported.

Forty hours of their community service had to be used to implement the constructive engagement ideas they mentioned in their assignment, the report added.

According to the university, they will be expelled if they fail to comply with the sanctions.

The students copied Nazi youth movement posters without their swastika flags for posters for an “Anglo-Afrikaner student” event under the motto “Fight for Stellenbosch” in English and Afrikaans.

One series showed a blond brown-shirted man and another a young woman with long blond braids.

Scores of mainly black students and some academics condemned the posters publicly.

Two years ago, the same university was rocked by protests by black students against teaching in Afrikaans, a language widely identified with apartheid.

The campus is moving away from its whites-only roots and its racial composition today better reflects the country’s mixed demographics.

Black, coloured and Asian students make up around a third of the university’s population compared to only a few non-whites in 1990. It teaches in English and Afrikaans.