Ethiopia an 'anchor of peace' in a region with 'troubled waters' – U.S. Senator 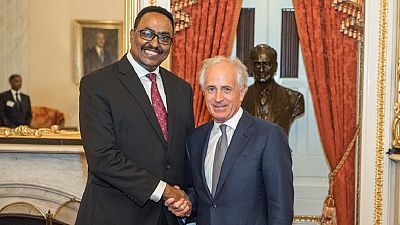 Ethiopia has been described as an anchor of peace in the restive Horn of Africa region. This is according to United States senator, Bob Corker.

According to the Corker who is Chairman of the Senate Foreign Relations, the highest body of the senate in charge of foreign relations of the USA, the region was one that could be described as one in ‘troubled waters.’

He was speaking during a meeting with Ethiopia’s Minister of Foreign Affairs, Dr. Workneh Gebeyehu, who is in the U.S. to participate in a security summit.

Workneh as part of his engagements, briefed Congress staffers on Ethio-U.S. Relations relative to developments in Ethiopia and the region.

The Horn of Africa region suffers from major security issues with the major terrorist threat coming from Al-Shabaab militants. The Somali-based group have made deadly forays into neighbouring Kenya.

Ethiopia has domestic security issues that resulted in a state of emergency being imposed in October last year to quell spreading anti-government protests in two regions – Amhara and Oromia. Rules under the curfew have largely been downgraded but it was extended upon expiration in April this year.

The country hosts the African Union headquarters and is a member of the Intergovernmental Authority on Development (IGAD). Despite its own challenges, they continue to lead the security initiatives in the region.