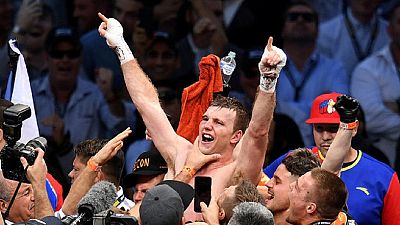 Australia’s Jeff Horn on Sunday defeated Filipino Manny Pacquiao in a bloody Brisbane battle to claim a unanimous 12-round decision and win the WBO world welterweight title in front of 50,000 fans at Lang Park.

“I take massive confidence from this fight. I believed in myself before the fight but now I have done something like this I have climbed the Pacquiao mountain as I like to call it. Now I have to look at the other guys who are up there as well, which is Keith Thurman and Errol Spence. They are the two targets I guess on the list as well,” Horn said.

I take massive confidence from this fight. I believed in myself before the fight but now I have done something like this I have climbed the Pacquiao mountain.

“I think Manny is a legend, I still do. He fought his heart out today – you can never ask for more than that. Yeah I mean a couple of things happened, I mean saying that it would be early (end early), I thought ‘No way’. I’ve visualized this fight over in my mind many times. We’ve gone over the strategy, as I have said ‘you plan the work, you work the plan’ and we did that to perfection,” he added.

Pacquiao, one of the finest boxers of his generation, paid the price for a slow start and his inability to end the fight with a knockout.

The 38-year-old was knocked off his stride by the aggression of the taller and heavier Australian in the early rounds but looked to have weathered the storm as the fight wore on and Horn tired.

“I thought it was a pretty close fight, though I thought Manny had a pretty good round in the ninth. I thought maybe a two point round. And I just told Manny to give me one more of them and the fight is over and it is done – but he just couldn’t do it. And we lost the decision you know,“Pacquiao’s trainer Freddie Roach said.

The bout ended with the fighters in a clinch on the ropes and although Pacquiao gave a little shuffle and a grin to show he had plenty left in the tank, his fate was in the hands of the judges who marked him narrowly down.