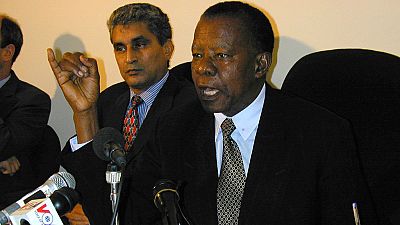 The Botswana government on Friday announced the death of its former leader, Ketumile Masire. Masire who ruled the southern African nation for close to two decades died at the age of 91.

The country has subsequently declared three days of national mourning for the man who ruled between 1988 and 1998.

The AFP news agency reports that the former leader is seen as the figurehead that fought for the country’s political stability and preparing it for economic takeoff.

He did not only do it for South Africans. It's on record that he did it for the region

This morning President Khama was at Parliament, where he signed a book of condolence in remembrance of the late former President Masire pic.twitter.com/1T8dVHpUCI

He is credited with keen involvement in resolving regional conflicts and is seen is a very vocal critic of the apartheid regime in neighbouring South Africa and other independence struggles in Namibia, Zimbabwe and Mozambique.

South Africa’s state broadcaster quotes its High Commissioner to the country as lauding the independence struggles across the region. “He did not only do it for South Africans. It’s on record that he did it for the region,” ambassador Mdu Lembede said.

His vice, Festus Mogae, took over when Masire stepped down in 1998.