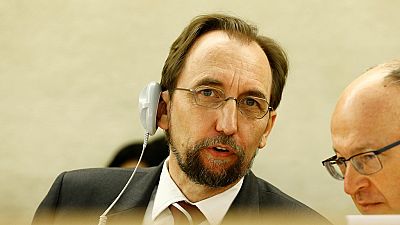 The United Nations (UN) human rights chief is talking tough relative to his request to the Democratic Republic of Congo (DRC) to allow for joint investigations into the death of two UN investigators in the restive Kasai region.

Zeid Ra’ad al-Hussein, the UN High Commissioner on Human Rights was speaking on Tuesday about his concern over the lack of response of Kinshasa. He had called for a joint UN investigation with the Congolese judiciary on the Kasai violence.

He stressed that it was imperative that urgent measures be taken before the situation in the region goes from bad to worse.

Their families deserve justice. We owe it to their legacy to end the human rights abuses being carried out by armed groups and the DRC government against the Congolese people.

“The already serious situation in the Kasai provinces of the Democratic Republic of Congo continues to deteriorate, extending to other provinces and across the border with Angola,” he said.

“Unless I receive appropriate responses from the government regarding a joint investigation before June 8, I will insist on the establishment of an international investigation mechanism for the Kasai region,” he threatened.

U.S. urges U.N. chief to look into who killed investigators in Congo

The United States urged the United Nations on Monday to investigate who murdered two U.N. sanctions monitors in Democratic Republic of Congo amid mounting criticism of the Congolese authorities’ own inquiry.

American Michael Sharp and Swede Zaida Catalan disappeared in March in central Congo’s Kasai region, where hundreds have died since last July in an insurrection against the government. Their bodies were found two weeks later in a shallow grave.

They were part of an independent panel of experts investigating sanctions violations, who report to the United Nations Security Council.

U.N. Secretary-General Antonio Guterres set up an internal board of inquiry into what happened, which is due to report by the end of July, but U.S. Ambassador Nikki Haley called for him to establish a special investigation that would lay blame.

“Their families deserve justice. We owe it to their legacy to end the human rights abuses being carried out by armed groups and the DRC government against the Congolese people,” Haley said in a statement.

Sweden has opened a police investigation and U.N. diplomats said U.S. authorities had also been looking into the case.

U.N. spokesman Stephane Dujarric said the U.N. secretariat intended to “use the maximum range of authority” in carrying out the board of inquiry and Congo had “the duty and responsibility to carry out a criminal investigation.”

“The secretariat cannot substitute the criminal justice system of a sovereign country. We stand ready to support any investigative mechanism set up by the relevant inter-governmental bodies,” he said.

Congolese military prosecutors said last month that two suspected militiamen would soon face trial for the killings, but rights groups say they suspect Congolese forces could have been involved in the deaths.

Dujarric cast doubt last month on the credibility of the Congolese investigation, saying the world body was “taken aback at the rapidity at which it was done.”

Haley said the United States would also support the Geneva-based Human Rights Council establishing a Commission of Inquiry into the ongoing human rights violations in the Kasai region, where Sharp and Catalan disappeared.

About the Kasai crisis

The remote, heavily forested region in central Congo has been riven by clashes since July between security forces and a local tribal militia called the Kamuina Nsapu .

Hundreds of people have been killed and over 1 million displaced since fighting broke out when police killed the militia’s leader last August, the United Nations has said. U.N. investigators have discovered at least 42 mass graves in the Kasai region.

Insecurity in Congo, where millions died in civil wars around the turn of the century, has worsened since December when President Joseph Kabila refused to step down at the end of his constitutional mandate.