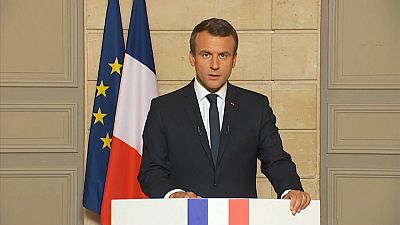 Italy, France and Germany have said they regretted U.S. President Donald Trump’s decision to withdraw from the Paris climate accord and dismissed his suggestion that the pact could be revised.

“We deem the momentum generated in Paris in December 2015 irreversible and we firmly believe that the Paris Agreement cannot be renegotiated since it is a vital instrument for our planet, societies and economies,” the leaders of the three countries said in a rare joint statement on Thursday evening.

French President Emmanuel Macron was even blunter, labeling the move a mistake, warning there is ‘no way’ the pact can be renegotiated and calling it everyone’s responsibility to “make our planet great again”.

Statement on the US’ withdrawal from the Paris climate agreements. #parisagreementhttps://t.co/T4XOjWZW0Q

Macron, Italian Prime Minister Paolo Gentiloni and German Chancellor Angela Merkel urged their allies to step up efforts to fight climate change and in particular help developing countries meet their pledges in the absence of US funds.

The three leaders had tried to convince Trump last week at a G7 summit to stay in the pact and honor U.S. commitments undertaken by the previous administration. British Prime Minister Theresa May voiced her “disappointment” at Trump’s decision.

“I do respect this decision but I do think it is an actual mistake, both for the U.S. and for our planet,” Macron said in a televised address in English from the Elysee presidential palace.

“I reaffirm clearly that the Paris agreement remains irreversible and will be implemented not just by France but by all the other nations. Because wherever we live, whoever we are, we all share the same responsibility: Make our planet great again,” Macron said, in a rebuttal to Trump’s ‘Make America great again’ campaign slogan.

Come here with us to work together on concrete solutions for our climate, our environment. pic.twitter.com/JXiqgMP8Xy

Macron reiterated an invitation to U.S. researchers and scientists frustrated by Trump’s stance to come to work in France to fight climate change.

“France will put forward a concrete action plan to increase its attractiveness for researchers and companies in the ecological transition sector and will take initiatives notably in Europe and Africa on this subject,” Macron said.

Former US President Barack Obama also slammed Trump’s decision, saying a withdrawal meant an abdication of American leadership, and that the nations that remain in the Paris agreement will be the ones to reap the benefits in terms of jobs and industries created.

JUST IN: Statement from President Barack Obama on the Paris Climate Accord: pic.twitter.com/hVDrsPFrTH