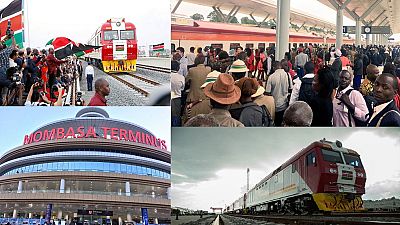 Kenya’s new $3.8 billion China-funded Standard Gauge Railway has been launched with pomp and pageantry as new trains for both passengers and cargo make the first trip from the coastal city of Mombasa to the capital Nairobi.

The 4000 tonnes a trip cargo train was launched Tuesday and the 1200 passenger train -named Madaraka Express – on Wednesday by President Uhuru Kenyatta to run the 472 kilometers between the two cities.

Today is a historic day as we board #MadarakaExpress. We are Nation proud of our achievement and focus on transformation. God Bless Kenya.

The foundations we lay today will lead us to a new chapter of industrialization.

The foundations we lay today will lead us to a new chapter of industrialisation. pic.twitter.com/fMU7gVyE3r

The trains travel at a maximum speed of 120 kilometers per hour and will make stops at the nine newly built stations along the route during the 5-hour journey.

“We know that buses take about nine to ten hours. Travelers will cover that in half the time, so this is going to be a real advantage,” Transport Minister James Macharia told local media.

The facility, funded by Chinese consortium China Communications Construction Company, will be managed by the same company for the next ten years before it is handed over to Kenya.

By December, they will offer two services including an intercity service that has one stop, Kenya Railways announced.

40 passenger coaches have been procured with a capacity of 118 travellers for the economy class, 72 for business class, and 44 for first class in the first phase of the project.

The Mombasa-Nairobi railway is the first phase of Kenya’s plan to build a 3,500 km network that will connect the country to Uganda, South Sudan and Ethiopia.

The second phase will extend the line for 120km from Nairobi to Naivasha at a cost of $1.5 billion funded by the Chinese government.

Agreements have already been signed with the China Communications Construction Company to build the other phases that end at Malaba on the Ugandan border.

Kudos KenyaRailways_ on the launch of the #MadarakaExpress train service between Nairobi and Mombasa. Good for Tourism, Good for Kenya. pic.twitter.com/OgDbNVqe4r