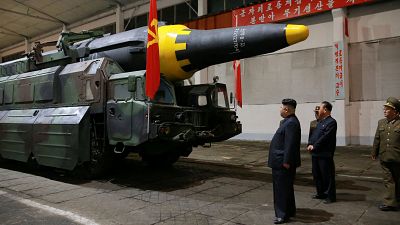 North Korea has fired what appears to have been a short-range ballistic missile .
It is the latest test in a series of launches which have angered and alarmed the region and the West..

Monday’s missile ( May 29) is believed to have been a Scud-class ballistic which flew about 450 km and landed in the sea off its own coast.
North Korea has a large stock pile of short range missiles originally developed by the Soviet Union.

“As we agreed at the recent G7 summit, the North Korean problem is a top priority for the international community. In order to restrain North Korea, we will be take specific action together with the United States.”

At the recent G7 summit in Italy the leaders described North Korea’s recent nuclear and missile tests as a grave threat.
They warned the North that it must fully comply with all relevant UN Security Council Resolutions and abandon all nuclear and ballistic missile programs.