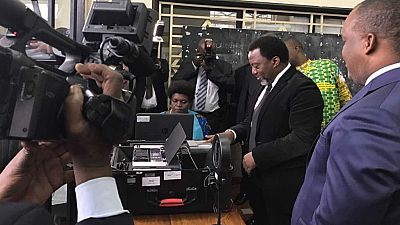 The Democratic Republic of Congo’s President Joseph Kabila has joined residents of the capital Kinshasa on Sunday to register to vote in the controversial presidential election that has an uncertain date.

The country’s Independent National Electoral Commission (CENI) started the voter registration process early this year after the United Nations mission airlifted 3,900 tonnes of election materials to 15 election centres around the country and distributed to 107 satellite stations.

Already, 24 million voters have been registered out of the expected 45 million, the provincial executive secretary of the CENI in Kinshasa, Anne-Marie Mukwayanzo said.

The CENI came under pressure last year to complete the voter registration process ahead of the earlier slated November 2016 election date.

They explicitly stated that they were unable to meet the election deadline due to lack of resources. A court extended the mandate of President Joseph Kabila whose term expired in December last year.

A peace agreement was reached for a unity government after series of protests by the opposition who called on Kabila to step down. He agreed not to alter the constitution to stand for a third term in office.

However, his government says the $1.8 billion needed to organize the polls this year was out of reach.

The election is expected to be held latest by early 2018.

“It will take time but as soon as the voters register is available, we shall have an election,” Kabila stated in August 2016 during a visit to neighbouring Uganda.