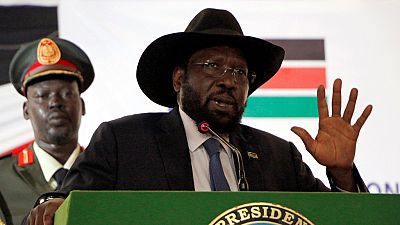 President Salva Kiir says he prefers to dialogue with the rebels in the absence of Riek Machar for fear that he could spark another conflict if he come back to South Sudan.

However Salva Kiir says he is open to Machar’s delegation and has guaranteed their security.

Kiir spoke at the swearing ceremony of the members of the dialogue committee which he formed earlier this year.

The Sudanese government says “the dialogue should start with those that are willing while the committee continues to engage those who are hesitant or have concerns.”

As a gesture of goodwill and in the spirit of national dialogue, Salvar Kiir has called on the judiciary to “review the cases of those who have committed crimes against the state, and take necessary steps to ensure their release.”