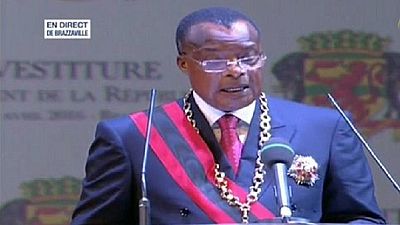 President of the Republic of Congo, Denis Sassou Nguesso, has responded to opponents who claim he wants to be president for life.

He was speaking in an interview with the France24 news channel in a broad-based interview that touched on political, economic and social issues in the Republic of Congo.

The 73-year-old leader who has ruled the Central African country for over three decades won reelection last year. Asked about claims peddled by opponents that he wanted to be president forever, Sassou replied: ‘‘I am not God, and I have not said that I will be president for life.

For the time being, we have a mandate from the people and we will carry it out to the end if God wills.

‘‘What is true is that we have never usurped any mandate, and all the mandates we have exercised have been exercised by the Congolese. For the time being, we have a mandate from the people and we will carry it out to the end if God wills it,’‘ he stressed.

Asked about an extension of his current mandate, the President said his team was focused on delivering the current mandate which runs till 2021, ‘‘I say today we have a mandate entrusted to us by the people.’‘

Since coming to power in 1979, he has been in charge of the country except for a five-year period (between 1992 and 1997). He announced a constitutional referendum in March 2015 which was overwhelmingly approved by voters later in the year.

That vote allowed him to run for a third consecutive term which he secured by over 60% of votes in the March 20, 2016 elections.

He is one of the continent’s longest-serving rulers alongside the likes of Angola’s Jose Eduardo dos Santos – who retires this year, Zimbabwe’s Robert Mugabe, Uganda’s Yoweri Kaguta Museveni, Cameroon’s Paul Biya and Teodoro Obiang Nguema of Equatorial Guinea.