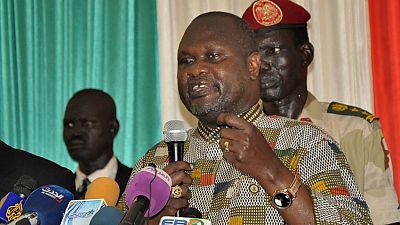 Seven South Sudanese opposition groups, including that of rebel leader Riek Machar, said on Saturday they had agreed to work closely in their bid to oust President Salva Kiir’s government, as the civil war drags on in the oil-producing nation.

Signatories of the agreement included former government ministers Kosti Manibe and Lam Akol, as well as Thomas Cirillo Swaka, the military’s former head of logistics, who resigned in February citing rampant human rights abuses by the military and the dominance of President Kiir’s Dinka ethnic group.

“In working together, our efforts – political, diplomatic, and military efforts – can be more effective than when we operate as different units,” said Nathaniel Oyet, a senior official in Machar’s SPLA-IO group.

The move triggered a conflict fought largely along ethnic lines, pitched parts of South Sudan into famine, and forced a quarter of the population – 3 million people – to flee their homes. The United Nations has said the violence amounts to ethnic cleansing and risks escalating into genocide.

Machar’s SPLM-IO group has battled soldiers loyal to Kiir for more than three years but several of his generals broke off to form their own movements or to join Kiir’s government.

Other anti-government groups have also emerged since the conflict erupted. Some have battled each other.

In their statement on Saturday the opposition leaders said they would hold a conference “with a view to seeking a united front on common strategic and operational issues”.

“We feel that if we have one objective that is to remove the government … then we need to coordinate our effort and we need to speak one language,” said Oyay Deng Ajak, a member of a group of exiled former officials of the ruling SPLM party who have stayed neutral in the conflict.

Ajak said some contentious issues remained, including over the appointment of a chairman.

Presidential spokesman Ateny Wek Ateny said the government would not negotiate with any new opposition members.

“The government is not recognizing this kind of group,” he told Reuters. “We have no timetable for them.”