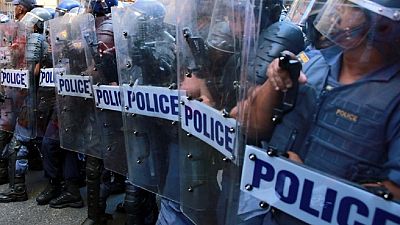 Police fired stun grenades and rubber bullets at protesters in southern townships of Johannesburg on Tuesday to quell the latest violence over lack of housing and jobs, piling pressure on President Jacob Zuma’s government.

Residents in the Eldorado Park and Ennerdale townships in South Africa’s economic hub pelted police cars with stones and blocked a highway with burning tyres and rocks, prompting riot police in protective gear to fire back at them.

Police said at least 15 people were arrested during the unrest, which started as a protest against the lack of housing and jobs there, and several shops were also damaged and looted.

Poor South Africans in black townships and shanty-towns complain they have not seen any benefits since white minority rule ended more than two decades ago.

But the government is limited by South Africa’s weak economy and is wary of polices that might further tarnish its image as an investor-friendly emerging market.

Protester Marlene Loggenberg told Talk Radio 702 she has been on a waiting list for a subsidised house for over 30 years.

“They told me that my salary is too little for a (mortgage) bond and too much for an RDP house,” she said, referring to government-funded low-cost housing units.

Another protester, who would not give her name, said she joined the demonstration to demand the government build her a subsidised house or give her a piece of land to build a shack.

Gauteng police spokesman Lungelo Dlamini said police would remain in the area until the situation is under control.