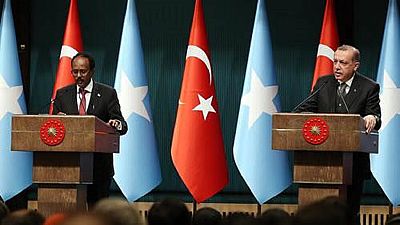 Erdogan made the remark on Wednesday in Ankara during a joint press conference with Somali President Mohamed Farmajo who is in Turkey on a three-day state visit.

“Many developed western countries are playing the ostrich in the face of such human tragedies. We, on the other hand, are doing everything in our power through the Turkish Red Crescent and Turkish Cooperation and Coordination Agency (TİKA) to deliver aid,” Erdogan said.

Many developed western countries are playing the ostrich in the face of such human tragedies. We, on the other hand, are doing everything in our power through the Turkish Red Crescent and Turkish Cooperation and Coordination Agency (TİKA) to deliver aid.

President Farmajo commended Turkey for its role in Somalia and signed bilateral agreements with Turkish government in areas including security and economy.

Somalia is the largest receiver of Turkish aid and Erdogan has visited Mogadishu three times since 2011 when he helped turn attention to the deadly famine that ravaged much of southern Somalia at the time.

In June 2016, Erdogan opened Turkey’s largest Embassy building in the world in Mogadishu during his East African tour. He also signed agreements including treaties to train the Somali national army.

The two-day event organized by the Turkish Agriculture Ministry has over 300 participants, including agricultural ministers of African countries, ambassadors, representatives of international organizations and the private sector.

Farmajo told participants that the conference is timely in the face of food insecurity, climate change challenges, high youth unemployment and unprecedented urbanization.

“It is up to us to ensure that we overcome these devastating challenges, which holds us all back and further challenges our public expenditure through the need for direct interventions such as medical care which is expensive.

“With investment in Agriculture and the value added agribusiness, not only can we mitigate the negative policy impacts of food insecurity, but we can also turn the tide of our young and brightest leaving our continent for better opportunities for themselves and their families,” he said.

Farmajo added that the Somali government is determined to sustainably overcome the famine by prioritizing food security, climate change and the creation of Agribusiness as a means of feeding, employing, upskilling and economically empowering our people.

He invited Turkish companies to “invest in Somalia’s agriculture and agribusiness for the progress and prosperity of our two sides.”