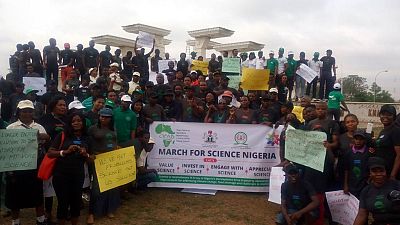 As the world marks the 2017 Earth Day to create awareness on environmental and climate protection, tens of thousands of scientists and science advocates worldwide are marching in 500 cities to speak out about the importance of scientific research.

Although the March for Science was sparked by the Trump Administration’s position on climate change and budgetary cuts for science research, Africans in Africa are also marching for more investment in science in their countries.

The march is going on in Nigeria’s capital Abuja, Ghana’s capital Accra, Kampala in Uganda, Blantyre in Malawi and Cape Town as well as Durban in South Africa among other cities.

The #marchforscience in Nigeria will bring together scientists, researchers, the media and lovers of #Science to speak with one Voice! pic.twitter.com/KRt0rPcvMu

Join the #MarchforScience tomorrow April 22 at the Afia Beach Hotel at 10am. pic.twitter.com/0rjW8eYNGE

The organisers of the main March for Science in United States capital Washington D.C. say the march is “not only about scientists and politicians; it is about the very real role that science plays in each of our lives and the need to respect and encourage research that gives us insight into the world.”

“In the face of an alarming trend toward discrediting scientific consensus and restricting scientific discovery, we might ask instead: can we afford not to speak out in its defense?” they questioned.

The Earth Day activities have been infused into the March for Science to build a global citizenry fluent in the concepts of climate change and aware of its unprecedented threat to the planet.

Google has also launched a doodle for Earth Day on Saturday with a series of stories of a sleeping fox that has a nightmare about the consequences of climate change, featuring melted icebergs and dead plants.

See below some pictures and reactions from the #MarchForScience events in African cities.