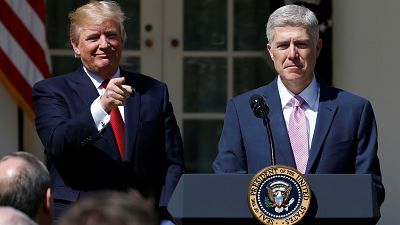 Donald Trump’s pick for the US Supreme Court has been sworn in to the lifetime post in a ceremony at the White House.

The appointment of Neil Gorsuch was confirmed by the Republican-led Senate on Friday and is seen as a major victory for the president.

The conservative judge fills a year-long vacancy and comes despite strong Democratic opposition.

“I have always heard that the most important thing that a President of the US does is appoint people hopefully great people like this appointment to the United States Supreme Court, and I can say this is a great honour,” the president said.

The president thanked the Senate Majority leader for helping to secure confirmation for the new judge from Colorado. His appointment gives the Supreme Court a conservative edge, at least on paper.

However Gorsuch has vowed to be independent and has criticised Trump’s attacks on judges as “disheartening” and “demoralising”.

The 49-year-old is the youngest Supreme Court nominee for over 25 years.

President Trump praises Judge Neil Gorsuch at swearing-in ceremony and says, “I got it done in the first 100 days” https://t.co/mHTrPX8RQf