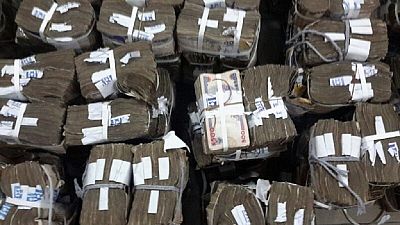 It further reports that the money, stashed in several Ghana-Must-Go bags were in N500 and N1000 denominations, hidden in a shop awaiting conversion into foreign currency, was recovered on Friday evening, according to a statement by the spokesperson for the commission, Wilson Uwujaren.

Traders interviewed at the premises, according to the EFCC, claimed they were not aware that such money was housed inside the shop, as the place hardly opens for business.

In February, the EFCC recovered $9.8 million and £74, 000, all in cash, from the residence of the former group managing director of the Nigerian National Petroleum Corporation (NNPC), Andrew Yakubu. But the former NNPC boss claimed the money was given to him as a gift by unnamed persons and has gone to court to challenge its seizure by the commission.