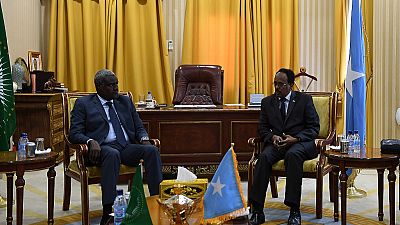 The African Union has donated $100,000 to Somalia in support of the fight against starvation caused by drought affecting the Horn of Africa and other parts of the continent.

The new Chairperson of the Commission announced the donation during his first visit to the country on Saturday where he called on member states, private sector and the international community to emulate the gesture.

“I had the privilege of being received by the Prime Minister and President of the Federal Republic and I expressed our support and solidarity to Somalia … the African Union will stand with Somalia during this difficult time,” Moussa Faki Mahamat told journalists in Mogadishu.

I expressed our support and solidarity to Somalia ... the African Union will stand with Somalia during this difficult time.

Somalia is facing the brunt of the climate change coupled with the Islamist group al-Shabaab insurgency which is battling the UN-backed government for over a decade.

The United Nations has estimated that financial aid of $863.5 million is needed to save lives and livelihoods in Somalia.

Somalia’s President Mohammed Abdullahi Mohammed Farmajo declared the ongoing drought in the country a national disaster to address the humanitarian emergency in all affected areas.

Read here for the reality of the drought situtaion on the ground in Somalia, South Sudan, Kenya, Ethiopia and other parts of Africa affected by climate change and conflict.