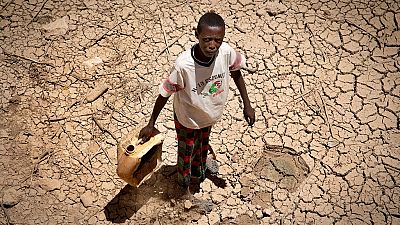 Millions of people in over a dozen countries in the Horn of Africa and southern Africa are facing the peak effect of severe drought that hit the regions resulting in famine.

Worst among the countries are Somalia, South Sudan, and Nigeria in West Africa who are part of the more than 20 million people estimated by the United Nations to be facing severe famine and starvation in the world.

The World Health Organisation (WHO) warned that Somalia is at risk of its third famine in 25 years after the previous crisis in 2011 that killed about 260,000 people.

Somalia’s neighbour Kenya is also facing drought in half of the country – 23 of its 47 counties nationwide.

United Nations humanitarian chief Stephen O’Brien described the crisis to the Security Council as the largest since the second world war in 1945, and an amount of $4.4 billion is needed “to avert a catastrophe” in Somalia, South Sudan, Nigeria and Yemen in the Arabian Peninsula.


Source of the Crisis

Like South Sudan, the famine in northeastern Nigeria is as a result of the seven-year insurgency of the Islamist sect Boko Haram killing over 20,000 people and with at least 2.6 million people displaced and 5.8 million in dire need of humanitarian aid.

The Horn of Africa countries are facing their third consecutive year of drought.

Ethiopia is experiencing below average rains in the southern and eastern parts of the country caused by the negative Indian Ocean dipole and La Niña leading to drought.

This is a repeat of last year when drought caused by the El Niño climate phenomenon left 10.2 million people hungry and several hundred thousand of animals killed.

Somalia is also facing the brunt of the climate change coupled with the Islamist group al-Shabaab insurgency which is battling the UN-backed government for over a decade.

For Kenya, the climate change is causing drought which is affecting 23 of its 47 counties in the country.


The Need and the Needy

The South Sudanese government declared famine in two regions of the East African country where more than 100,000 people do not have access to food.

The declaration was backed by three UN agencies: Food and Agriculture Organisation, Unicef and the World Food Programme.

Somalia’s President Mohammed Abdullahi Mohammed ‘Farmajo’ declared the ongoing drought in the country a national disaster to address the humanitarian emergency in all affected areas.

He called on small businesses in the country and nationals in the diaspora to contribute in avoiding a disaster.

Kenya has also declared the drought a national disaster and called for local and international support of the government to contain the situation.

The Kenyan government has pledged US$99 million to support national drought response efforts.

The government also set aside about $1.5m to be disbursed to various institutions in the country to bolster the school feeding program in parts of the country experiencing drought.

The Ethiopian government has been distributing food aid to areas hit by the drought. Addis Ababa has gone as far as send food aid to Somaliland last month.

The government of Nigeria announced in May 2016 the disbursment of $41 million to rebuild and implement support programmes for about 1.8 million refugees in the Internally Displaced Camps (IDPs).

In July 2015, President Muhammadu Buhari established a Presidential Committee on North-East Interventions (PCNI) to coordinate domestic and international humanitarian efforts, but as of July 2016, the committee had still not been inaugurated.

In December last year, He accused the UN and aid agencies of deliberately exaggerating the humanitarian crisis to get more funds.

The Borno State governor Kashim Shettima in January accused some aid agencies of wasting funds meant to help victims of the Islamist Boko Haram insurgency and concentrating too much on the IDP camps instead of recovery, reconstruction and rehabilitation.

Uganda is now host to over 780,000 South Sudanese refugees with an average of 2,500 crossing the border every day to escape attacks and hunger, according to the UNHCR.

President Museveni has been commended for his country’s response to the humanitarian crisis despite Uganda’s own food crisis which is not at alarming proportions due to adoption of new agricultural practices spearheaded by the government.

A few is being done from Africa as against the vibrant campaigns ongoing outside the continent to support aid organisations.

The World Bank Group President Jim Yong-Kim announced that the bank was working towards raising 1.6 billion dollars to build social protection systems to end the food insecurity in sub-Saharan Africa and Yemen.

The Queen of England is making a personal donation towards helping those facing starvation in East Africa while the UK government has pledged to match public donations pound for pound, up to £5 million.

Prime Minister Theresa May: 'We will match pound for pound the first £5 million donated by the public to decappeal #fightingfamine #UKaid pic.twitter.com/5O32tyJTru

Four-time Olympic champion, British runner Sir Mo Farah has backed the UK’s appeal as the new ambassador for Save the Children. He is urging people to donate and save the 800,000 children aged up to five who need treatment for severe acute malnutrition in the four east African countries.

French Snapchat star Jerome Jarre, who appeared in “Zoolander 2” started a hashtag #TurkishAirlinesHelpSomalia to get the airline to carry food and water to Somalia since it flies there.

MAINSTREAM MEDIA WON'T TALK ABOUT IT !!!

This call was backed by actor Ben Stiller who recorded a video calling on people to donate or spread the word to those who can, to support the millions facing starvation in Somalia and neighbouring countries.

If you have 2 minutes and 20 seconds check this out. #TurkishAirlinesHelpSomalia pic.twitter.com/r0u3xh5spG

American Football (NFL) quarterback Colin Kaepernick also joined the call to action by posting an Instagram video asking followers to make videos in support of sending aid via Turkish Airlines in their own languages.

Via kaepernick7: Mainstream media is not covering this! Make a video in your own language and help us get... https://t.co/FgtWPt439u pic.twitter.com/VvYmbcGPDM

Turkish Airlines responded to the tweets by the celebrities on Thursday saying: “We love Somalia. We got the call for this meaningful flight.”

They added that they are in talks with the celebrities to offer a flight to Somalia with food aid.

There are other hashtags urging people to donate towards the crisis. These include: #EastAfricaCrisis where people tweet their contribution or encourage others to donate.

I've just #donated to Oxfam #eastafricacrisis via nectar – you can use your points now! pic.twitter.com/x6k5zuvekk

We have the chance to save lives now. Please follow and support ActionAidUK #EastAfricaCrisis ❤

There are dozens of aid agencies taking donations from cash to kind to help support the countries affected by famine caused by drought and conflict.

You can however make donations targeting specific countries through aid agencies listed below.