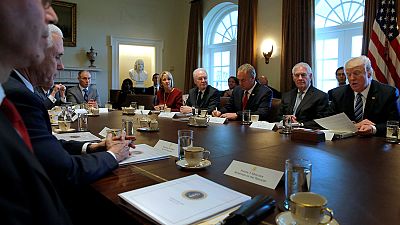 A long awaited report into a new Republican healthcare plan claims an estimated 14 million Americans will lose insurance coverage by next year. The nonpartisan Congressional Budget Office also said that number would rise to another 24 million by 2026.

“The CBO (Congressional Budget Office report) looked at a portion of our plan but not the entire plan […] So we disagree strenuously with with the report that was put out. We believe that our plan will cover more individuals at a lower cost and give them the choices that they want for the coverage that they want for themselves and for their family, not that the government forces them to buy.”

Democrats have lambasted the plan expressing shock at the numbers saying the poor and elderly will suffer.

“This is a remarkable figure. It speaks so eloquently to the cruelty of the bill that the speaker calls ‘an act of mercy’. I don’t know if he thinks it’s an act of mercy to all the people who will lose coverage, to people who lose jobs, to the hospitals that they have to close down, especially in rural areas,” said House Democratic leader Nancy Pelosi.

During his campaign, Donald Trump promised to scrap most elements of Obamacare which is hugely unpopular among Republicans, who claim it imposes too many costs on business and intrudes into the affairs of individuals.

ObamaCare is imploding. It is a disaster and 2017 will be the worst year yet, by far! Republicans will come together and save the day.

The new plan known as the American Health Care Act (AHCA) could reduce federal deficits by $337bn (316bn euro) over a 10-year period.

The AARP, a nonprofit advocacy group for aging Americans, have said the CBO analysis showed the financial burden of the Republican plan would fall “disproportionately” on Americans 50 to 64 years old.

Some health policy experts and Wall Street analysts said the CBO report was more draconian than expected, with the uninsured rate declining more quickly than foreseen. Doctors groups and patient advocates said the bill must be abandoned.