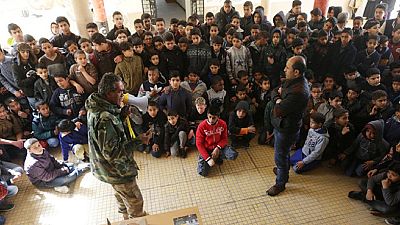 The Libyan army has launched an awareness campaign to warn Benghazi school students of the dangers of mines and other remnants of war.

“This program was launched as a result of a call we had with the military academy to lay out a plan to explain to students the dangers of mines in Benghazi and in places that were under IS control but have been freed,” he added.
Years of fighting in Benghazi has left many families displaced. Many have lost loved ones to mines that were left behind in areas once controlled by the Islamic State.

A member of the army’s moral guidance unit, Mohamed Bokhzam said family trips during the spring make it more likely for accidents to occur.

“Today we’re at one of the schools of Benghazi, Ibn Sinai School, and we’ve started, as the moral guidance unit, with the military academy members, explaining to students to warn them of the dangers of mines and bombs and war remains,” he said.

“I learned that when I find a mine, I shouldn’t touch it. I should tell my father and brother, so that they can contact the special forces and criminal investigators who can come and dismantle it.,” said Salem Aqnebar, a 13-year-old student.

According to the United Nations, there has been a significant increase in improvised explosive device (IED) incidents in 2016, particularly in areas occupied by ISIS.

The Libyan Army is planning to visit as many schools as possible across Benghazi, passing on their knowledge of mines so that children are aware and can avoid injury to themselves and others.

This comes as fighting threatens to escalate in the holder of Africa’s largest crude reserves.