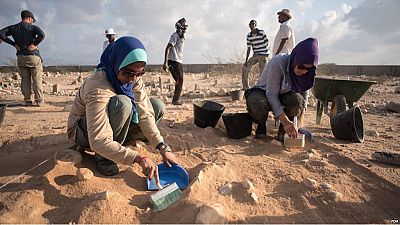 A team of forensic investigators scrape away soil covering a mass grave in the town of Berbera, Somaliland using metal hand tools.

Team said nearly two meters below the area are the bodies of 17 men who are believed to have been rounded up, shot and dumped nearly 30 years ago.

The men who were allegedly killed by troops are from the Isaaq clan, loyal to Somali dictator Siad barre, who were battling rebels from Somaliland at the time.

The campaign killed about 50,000 people, mostly from the Isaaq clan. According to the commission, this was a genocide, although the use of the term is disputed.

It has been more than 25 years after the civil war ended and Somaliland has declared its independence from Somalia, and researchers have continued to search for mas graves around the country.

For the past five years, Somaliland’s War Crimes Investigation Commission has teamed up with a group of international forensic investigators to exhume the bodies.

They hope to gather enough evidence to bring the alleged perpetrators of war crimes to justice.

Commission chair, Khadar Ahmed Like said the exhumation process is a matter of dignity for the dead, who often were dumped in pits without ceremony.

“Every person has the right to be buried in his religious method. So we are just taking out these bodies and we are burying them separately after cleaning and praying on them,” he said.

After days of digging with shovels and axes, the investigators discovered bodies. A skull wrapped in cloth pokes out of the dirt.

According to Like, in the past few years, the commission has exhumed 11 mass graves, including the one opened this year in Berbera alone.