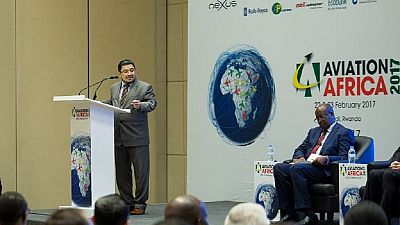 The Africa Aviation 2017 forum opened on Thursday at the Rwanda capital, kigali with over 500 delegates from different parts of the world.

The delegates are expected to discuss on the challenges, trends and opportunities within the African aviation industry.

The two-day forum was declared opened by President Paul Kagame who was hailed by several speakers at the event for championing pro-aviation and open space policies on the continent.

Participants at this year’s event are drawn from over 50 companies involved in various arears of aviation industry, including manufacturing, maintenance, training, catering, among others.

Rwanda’s Minister of Infrastructure, James Musoni while addressing participants said the forum will go a long way in addressing the existing challenges in aviation sector in Africa.

It is the second edition of the forum but the first in an African soil, the first edition was held in Dubai in 2015.
The Rwanda government sees aviation as a vehicle to promoting the country’s vision of becoming a service hub and the country’s national career.

Rwanda air has continued to expand its wings with Asia, Europe and the US expected to open up in the future.