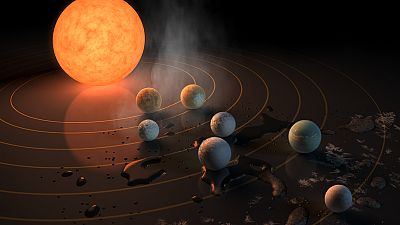 They may not have found aliens, yet, but astronomers have announced the discovery of seven Earth-sized exoplanets orbiting a dwarf star, named TRAPPIST-1, just 40 light years away.

These 7 Earth-sized planets were seen by @NASASpitzer around a nearby, ultra-cool dwarf star called TRAPPIST-1: https://t.co/G9tW3cJMnV pic.twitter.com/Z6gvaH96Tz

Data recorded from NASA’s Spitzer infra-red telescope revealed that three of the planets are firmly in the habitable zone and are the most likely to contain water. This means, we are most likely to find signs of life there and they could “have a shot at becoming a habitable ecosystem,” an international team from Europe and the US explained.

The TRAPPIST-1 star & 7 Earth-sized planets orbiting it, are relatively close to us; located ~40 light-years away: https://t.co/QS80AnZ2Jg pic.twitter.com/GiKAFXyNvo

The planets are much closer to each other than those in our solar system. Upon standing on one exoplanet, you would see the next closest as clearly as we see the moon from Earth.

Sean Carey, the manager of NASA’s Spitzer Science Center, called it “the most-exciting discovery yet” in the nearly 14 years the telescope has been operational.

The findings are one thing, but reaching the new solar system is another. While travelling there at light speed would take 39 or 40 years, at the speed of an average aeroplane, it would take some 44 million years!