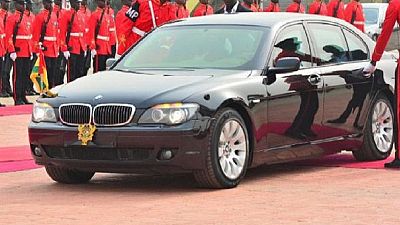 <p>Over 200 luxury vehicles in the pool of Ghana’s presidency are reportedly missing resulting in President Akufo-Addo having to use his personal vehicle for trips outside the capital. His only official vehicle is a <span class="caps">BMW</span> that was purchased a decade ago when Ghana turned 50 years.</p> <p>“He, unfortunately, has to use his own vehicles because the vehicle meant for the presidency or vehicles meant for his use are currently not available,” a government spokesperson disclosed on Wednesday.</p> <p>According to Eugene Arhin, a vehicle audit has shown that a total of 208 vehicles could not be accounted for the change of government early last month.</p> <p>According to him, records from the Presidency’s transport officer indicate that there are supposed to be 196 Toyota Land Cruisers, 73 Toyota Land Cruiser Prados, Mercedes Benz, <span class="caps">BMW</span>s and other vehicles. ‘‘Just these five models account for 208 vehicles which we strangely cannot find,’‘ he told pressmen.</p> <p>He says the new government met 74 Toyota Land Cruisers instead of 196 and 20 out of 73 land Cruiser Prados. There are also 11 instead of 24 Mercedes-Benz cars. He added that only 2 Toyota Avalons could be accounted for instead of 28. Out of 6 <span class="caps">BMW</span>s, only two are available.</p> <p>The opposition National Democratic Congress (<span class="caps">NDC</span>) have dismissed the claims, accusing the government of making excuses in order to buy new vehicles. </p> <p>President Akufo-Addo was sworn into office on January 7, 2017, after beating the then incumbent John Dramani Mahama in polls last December. It was Ghana’s seventh election under the 1992 constitution. It was the first time an incumbent was also defeated.</p>

He, unfortunately, has to use his own vehicles because the vehicle meant for the presidency or vehicles meant for his use are currently not available.