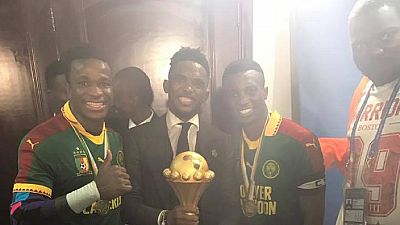 Cameroon’s Indomitable Lions will represent Africa in the FIFA Confederations Cup later this year in Russia ahead of the 2018 World Cup. They qualified for the tournament by virtue of being the current African champions.

As they continue to celebrate the feat of a fifth AFCON title, the country’s biggest footballer in recent times is asking the team to be worthy representatives of the continent at the Confederations Cup.

According to Samuel Eto’o who was in the stands in Libreville as the team won the crown by beating Egypt, Hugo Broos’s team must go and make Marc Vivian Foe proud at the event.

“Seeing Cameroon in the Confederations Cup reminds me of 2003. We will never forget you Foe! This team will make you proud, wherever you are. #playforfoe” he tweeted after the victory. His tweet was accompanied by a photo of him with former skipper, Rigobert Song, holding a photo of the late Foe.

Marc-Vivien Foé, was a Cameroonian international and professional footballer who gained global fame following his death during an international competitive fixture in the FIFA Confederation Cup.

He died on 26 June 2003, when the Indomitable Lions of Cameroon took on Columbia in the semi-final clash of the competition. He had played in wins against Brazil and Turkey but was rested for the game against the United States ahead of the Colombia fixture.

He represented the national side but also had an illustrious club career with top flight sides in Europe. The Cameroonian number 17 man at the time slumped and died at the State de Gerland in Lyon, France.

About the Confederations Cup

The Indomitable Lions came from behind to defeat Egypt 2-1 in the AFCON final in the Gabonese capital, Libreville. Second-half goals from substitutes Nicolas N’Koulou and Vincent Aboubakar secured the title for Hugo Broos and his men.

The competition gives each confederation’s best teams the chance at more glory on the very same stage that will host the FIFA World Cup, the greatest footballing show on earth, one year later.