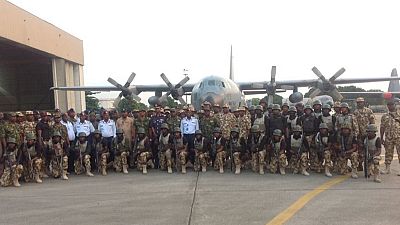 The Nigerian Air Force troops deployed to The Gambia as part of the ECOWAS mission to restore democracy in the West African country have returned to Nigeria.

The withdrawal started last Thursday after Nigeria’s Senate president Bukola Saraki briefed the media that the troops will be returning but “it is likely some number of troops will be kept behind”.

The ECOWAS forces were deployed to enforce a peaceful transfer of power and to protect the rights and freedom of civilians if defiant Yahya Jammeh decides to use the military to remain in power.

New Gambian President Adama Barrow who returned to the country last month assured the continuous stay of the joint troops who have announced that they will cut down the number.

“There is no time set for ECOWAS stay in the Gambia. They are here to help the process, and I think anytime we don’t need them to continue, this country will work that out so that their services will cease in this country,” Barrow said.