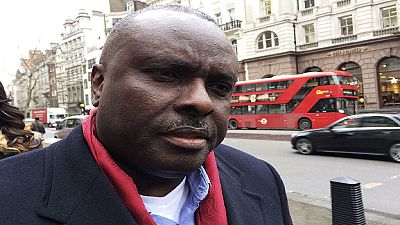 <p>A former governor of Nigeria, who was recently released from a United Kingdom jail has returned to the country. He was governor of the southern Delta State between 29 May 1999 and 29 May 2007.</p> <p>Local media portals reported that James Ibori arrived in Abuja on board British Airways flight on Saturday morning. Other portals report that he is meeting security operatives in Abuja for debriefing.</p> <p>On 27 February 2012, Ibori accused of stealing $250 million from the Nigerian public purse, pleaded guilty to ten counts of money laundering and conspiracy to defraud at a London court.</p> <p>Ibori was released from a UK prison in December 2016 after serving half of his 13-year sentence. He is expected to visit his village in the oil-rich Delta State later in the day. </p> <p>He told the <span class="caps">BBC</span> earlier this week that he was planning to appeal against his conviction and has instructed his solicitors to open the process. He had told the <span class="caps">BBC</span> on Wednesday February 1 that he was due to return home in a matter of days.</p> <blockquote class="twitter-tweet" data-lang="en"><p lang="en" dir="ltr"><span class="caps">FLASH</span>: Ex-convict James Ibori now with <span class="caps">DSS</span> in Abuja for debriefing after returning from UK to Abuja earlier</p>— Sahara Reporters (@SaharaReporters) <a href="https://twitter.com/SaharaReporters/status/827831994889490433">February 4, 2017</a></blockquote> <script async src="//platform.twitter.com/widgets.js" charset="utf-8"></script> <blockquote class="twitter-video" data-lang="en"><p lang="en" dir="ltr">Exclusive interview with convicted Nigerian money-launderer James Ibori on <a href="https://twitter.com/BBCRadio4"><code>BBCRadio4</a> at 1800. <a href="https://t.co/WzN8BDI00z">pic.twitter.com/WzN8BDI00z</a></p>&mdash; Mark Easton (</code>BBCMarkEaston) <a href="https://twitter.com/BBCMarkEaston/status/826849682143993857">February 1, 2017</a></blockquote> <script async src="//platform.twitter.com/widgets.js" charset="utf-8"></script> <p>He told Reuters that he could return to politics when he returns to Nigeria, ‘‘I am a politician, I will always be a politician. I play the politics in my party and in my country for the good of my people,’‘ he said.</p> <p>But local laws bar him from politics for a decade because of his conviction. He was a governor on the ticket of the opposition Peoples Democratic Party (<span class="caps">PDP</span>) and was seen as a close ally of two former presidents, the Late Umaru yar Adua and Goodluck Jonathan.</p>

I am a politician, I will always be a politician. I play the politics in my party and in my country for the good of my people.