Roof of Ghana's parliament ripped off by rainstorm, sitting disrupted 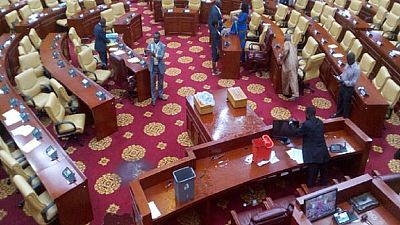 Ghana’s parliament had part of its roof ripped off and water dripping into the main chamber on Tuesday night after a severe rainstorm hit the capital, Accra.

While some media report that the incident brought an abrupt end to parliamentary sitting for the day, others said it occurred not long after the house had adjourned.

The Members of Parliament (MPs) had been called to consider a bill brought to the house under a certificate of urgency.

Local media portal, myjoyonline.com reports that the main chamber of the edifice was flooded after the incident. They added that electronic gadgets installed in the chamber were left at the mercy of the weather.

Pictures on most local websites show some staff of the parliament collecting dripping water in buckets whiles others salvaged documents left on desks.

This is what is left of the Chamber Block of Ghana's Parliament after yesterday's vicious and marauding rainstorms that hit Accra. #CitiCBS pic.twitter.com/UnDBhJ4u0z

The building was renovated in 2014 after MPs complained of congestion as the number of MPs had been increased from 230 to 275 in 2008. Infrastructural adjustments were made back then to ease the congestion and change worn out material.

Sometime last year there was a huge uproar by some MPs and civil society after the parliament imported Chinese chairs for MPs. Offices for MPs known as the Job 600 project was inaugurated last year by the former president John Dramani Mahama.

The Parliament House was constructed in 1965 under the country’s first President Kwame Nkrumah, it underwent renovation in 2012/2013.