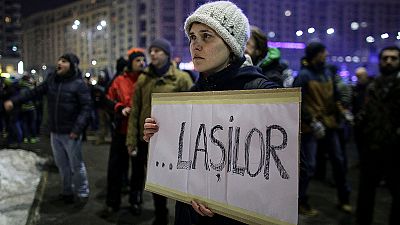 *An updated version of this story incorporating events on Wednesday February 1 is available here.

Thousands of angry protesters in central Bucharest have called for Romania’s government to resign after it decriminalised a number of graft offences by emergency decree.

Calling politicians “thieves” and “traitors” many people see the move as a massive retreat away from anti-corruption reforms introduced in the last decade.

Several prosecutors including Laura Codruta Kövesi, see it as a blank cheque for officials to abuse their positions of power.

“It is a project by emergency decree which will very severely affect the anti-corruption fight, basically if this project is adopted, the fight against corruption becomes irrelevant.”

The government claims the measure which takes offences causing less than 44,000 euros of damage, off the statute books, will ease prison overcrowding.

Prosecutors have, however, indicted nearly 2,000 people in cases involving abuse of power that have caused damages totaling up to 1 billion euros in the past three years.

Several leading politicians are under investigation or on trial in abuse-of-power cases, including the leader of the ruling Social Democrats and lower house Speaker Liviu Dragnea.

Opponents say the changes in the law will benefit mainly public figures past and present, caught up in the fight against high-level corruption.